Actually what she says is that the scientists who worked at the company she worked at, sold out for money. To use somebody talking about corruption within the Nuclear power industry is completely irrelevant. This tarring of all scientists with the same brush is an act of subterfuge called poisoning the well. It ignores the fact that anybody who makes claims about a hoax is subject to these same parameters.

The startling fact about this "whistleblower", is that she makes a whole lot of money talking about this freely and openly, yet the evil powers haven't seen fit to silence her! Bunkum.

Again you cite an irrelevant case. The safety aspect of using depleted uranium is thought to be questionable. But long term studies suggest otherwise. Scaremongering is very much a popularity grabber these days!

The first case cited April 15, 1999, the second video in 2011. Do you have an updated release from the Rand corporation given the new studies available to them?

Yes. Now all you have to do is to establish any single scientist tied to the Apollo programs who has spoken out about this. There are thousands of retired ones, not needing research grants or money, yet nobody has voiced an alternate opinion to the correct official account. There are millions of physics students throughout the world who offer no objection to the calculus involved in Lunar gravity, space radiation or radio transmissions. There are large numbers of engineers in all countries who also do not dispute the efficacy of the Apollo hardware. Orbital mechanics which is a very complex subject supports all aspects of the Apollo program.

To suggest they are all keeping quiet implies that they are all aware of a hoax and simply doing so to maintain funding and to stay alive. Bunkum.

An example where half assed research is presented as fact with no proper peer review. It is difficult to change anything when it is steeped in thousands of such peer-reviewed documents. Let alone by somebody who offers no counter to any of these documents, yet offers "Anti-Darwinian" theories based on suspect research and conclusions.

No, it means that if somebody presents crap unsubstantiated research to people who have previously performed superb research, it will be met with scorn.

Attributing this to finite science like geology has so many logical fallacies I don't know how to label it. How about just plain stupid. I did a full debunk on rock analysis by numerous institutions. The conclusions are nothing to do with keeping a hoax going, and it unintentionally adds a vast number of people to those who are "keeping the secret"! Geologists have no affinity to government or for that matter NASA. As stated previously, there are numerous now retired people who have examined the rocks.

Watergate and Monicagate to name just two. The modern press is littered with conspiracy stories, often with total scorn, but not always. The idea that somebody coming forward to blow the whistle on Apollo would be ignored is a ludicrous statement. It would make a story that would go viral in seconds.

Link 1:-
Somebody does a cartoon about news restriction. Amazing proof.

Link 3:-
More people alive and well, freely talking about restrictions in reporting on intelligence services and the CIA level of control. You'd think the evil people they were exposing would have bumped them off wouldn't you?!

Link 4:-
General search on one of the people in link 3 - William Schaap. He is still freely talking, giving his opinion and not being bumped off.

Link 10:-
Laura Knight-Jadczyk article. I shall simply state that this lady also postulates that Comet Elenin is the harbinger of doom.

You just cannot make up this level of contradictory stupidity.

Link 12:-
Same as links 7/8/9. Media whistleblowers, loads of articles from people telling their story, who fascinatingly are all still alive.

Link 1:-
Have to laugh here. The evil Fox news network documentary now telling the "truth"! More bunkum and speculation already discussed, concerning Apollo 1. As for link 2 below, a repeat link.

Link 2:-
Just a complete repeat of the section about deathbed confessions.
http://debunking-a-moron.blogspot.com/2011/07/deathbed-confessions.html

Link 3:-
People who disbelieve the official 911 story, suggested as being murdered to keep them quiet. Yet, hundreds upon hundreds of far more active campaigners remain alive. People who produce films that reach wide audiences, people who write books, people on youtube who churn out thousands of films.

Another wall of spam - wow! It should be taken as read that corruption in government is a given. There are all sorts of behind the scenes activities, subvertive motives and undisclosed operations. It is primarily a matter of establishing and keeping American interest abroad. Some of it sucks badly.

However, your use of it to link to the Apollo Moon landings is a big non-sequitur pile of bovine excrement. Apollo was the most open, detailed, heavily explained series of missions ever performed. There are hundreds of thousands of technical documents, films, photographs, audio and scientific publications.

The presence of this data presents a piece of history that can be analysed to as high a degree as could possibly be made. There is nothing missing from the detail that could be explained by subterfuge. There is no subterfuge that could explain the total detail released. The two go hand in hand.

When any rational person examines the science behind Apollo, there can be no question that the mission detail offers as complete and satisfactory account as any private citizen could require.

Begging the question. They don't. They support it because it wasn't faked.

Scientists around the world know Apollo was not faked. NASA is by no means the only source of data and information from space, and to suggest silence being bought for remaining quiet about a "hoax", involves thousands of complicit scientists, none of which has ever offered whistleblowing testimony upon retirement or deathbed confession.

Yes. No question about it. Human beings are inherently unable to keep secrets. 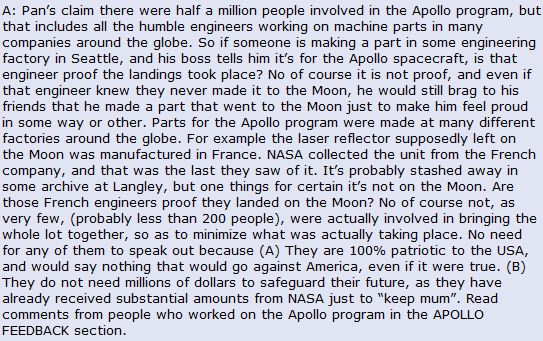 This is the old "compartmentalising" argument. This completely falls apart under the simple premise, that without direct knowledge, the half million people doing their jobs, would do so to ensure the mission was successful.

The whole scenario about hoaxes is perfectly summed up with this summary from the Clavius website:-

This section of the "wall of spam" highlights two points that massively contradict each other.

We have the premise that scientists and governments lie, "demonstrated" with whistleblowers and articles written and spoken by numerous individuals very much alive.

We then have the premise that nobody would speak out about Apollo because they would fear for their lives!