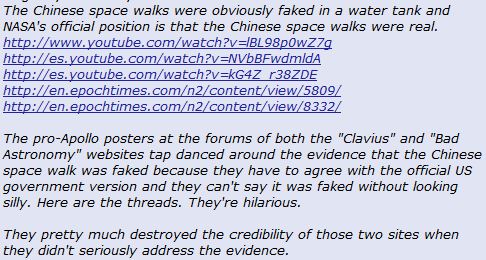 Here is part of the Chinese Spacewalk Footage:-

Before I begin debunking this, the user who made this, freely admits he has been given a "good run for his money" and concedes in this video that many of his points have been debunked.

I will pay particular attention to those that he insists have not.

During underwater footage in weightless training, the surface will reflect the light and cause shimmering lights on all surfaces.
A good example of this is the cylindrical object in this video, shimmering as light is refracted all around it:-

There is no evidence of this in the entire Chinese spacewalk. They would have had to have used a sealed chamber painted black to avoid all light reflection and surface wave refraction.

These are not bubbles. It is a combination of small loose assorted items, pieces of paper and frozen condensation. Many times in space, the introduction of a vacuum causes parts of the various coatings on the interior to freeze and break away.
Here is a video showing them exiting the hatch and always at different angles:-

The statement about there being zero gravity is just plain wrong. Zero-g means zero g-forces not zero gravity. This whole idea about accelerating objects is so easy to explain. The gravitational force at that altitude is circa 9 metres per second squared. Any object expelled towards the Earth, will still have orbital velocity, but as it now has slight downward velocity, it will accelerate very slightly as a result.The object that has caused most of a flap amongst hoax claimants, is merely a piece of debris that has moved diagonally towards the camera, in itself adding to what looks like even more acceleration. We can deduce this quite easily from it's apparent change in size which does not comport with a small depth change for a so called bubble.
The idea that objects should not exit the hatch after 10 minutes is invalid. He implies that it is due only to the very slight pressure release(usually residual air pressure) that the objects are expelled in the first place, when it is also that in moving about inside the craft, they have impacted the inside and deflected through the hatch. As seen in the video above, even the paper accelerates - wet sodden paper does not float!
It must also be pointed out that due to the way a wide angled lens shows movement at its edge, it naturally appears to move slightly quicker.

Adding this video to show the "bubble" that is a flat piece of tape:-

And this one to isolate the salient clip:-


"The principle of neutral buoyancy is used to simulate the weightless environment of space. First the suited astronauts or equipment is lowered into the pool using an overhead crane. Once this is done the suited astronauts weighted in the water by support divers so that they experience no buoyant force and no rotational moment about their center of mass."


"Neutral buoyancy is a condition in which a physical body's mass equals the mass it displaces in a surrounding medium. This offsets the force of gravity that would otherwise cause the object to sink. An object that has neutral buoyancy will neither sink nor rise."

This video demonstrates that very principle:-

This video shows tether cables with no tendency to rise and also demonstrates always in every example, the bubbles rise vertically:-

Further, a waveblower would set up a continuous current and would not magically disappear once it hits an object. if there were 2, one either side as suggested, there would now be cross currents. These in turn would cause significant instability of anything caught in its wake. There are no signs of turbulence you would expect from water movement, or no additional light refraction.

Wave blowers are introduced by the film maker to explain why the "bubbles" don't rise vertically, a logical fallacy and bunkum.

Is the film maker saying there is no water inside the hatch then?! The communication is actually pretty garbled. The Mandarin word for water is pronounced "shuway" I can't hear that said.
But some comments on the video disagree with the film maker:-

They are located here:- 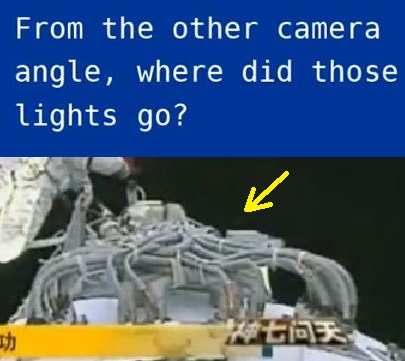 Here is a short excerpt referring to them:-


"Zhang Tao, a technician with the Shanghai Institute of Technical Physics under the Chinese Academy of Sciences, said the Shenzhou-7 mission's success marks China's space program has "entered a new stage." Zhang was in charge of developing the illumination lamp on the exterior of the Shenzhou-7 vessel."


Item 5 - The Markings on the Craft at take-off

He compares Shenzhou 1 launch with wider thruster displacement to Shenzhou 7. Shenzhou 1 has a noticeably more split triple exhaust, Shenzhou 7 is more combined - it has a bigger payload and more thrust. There is also a much bigger surface smoke cloud on the Shenzhou 1 launch. Here they are side by side with completely different plumes evident:- 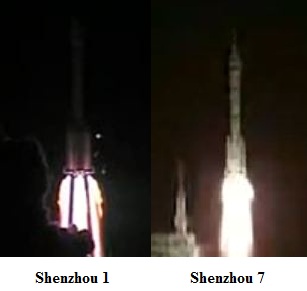 He says the photograph used by China Weekly shows different markings. It's just a low resolution version of the original. The markings are the same! 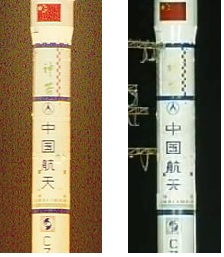 Item 6 - What is lighting the craft?

Of course it's Earthlight! The Earth has an albedo of 35%, meaning it reflects that percentage of light cast upon it. We can clearly see it is daylight.


Item 7 - The flag moves like it does in water!

This is complete nonsense. A flat fabric will not move that way in a viscous medium. The drag co-efficient of water would simply not allow it to rotate unrestricted. The fabric would simply wrap around the small pole. The references to there being no noticeable movement of the astronauts hand, ignore any movement made by simply moving the finger and thumb. He indicates that the flag is moved by water movement which is simply bunkum, water doesn't rotate a flag like that, it is simply impossible. The movement was supposedly down to the mysterious wave blowers!

Whenever astronauts let go in other space walks, they are either tethered, or have attitude control thrusters on their suits. Inexperienced astronauts could be forgiven for taking care. The narrator suggests they don't let go, because the water will sweep them upwards, yet it has no such effect on their position. If there was a mystery wave blower current, their legs would be swept upwards!

For hours he says? How about 20 minutes maximum, as is the duration of this spacewalk.
The craft thrusters initiate a rotation about its horizontal axis that matches its orb-rate around the Earth. It is used on most satellites, as opposed to something like the Hubble which has a stellar inertial orbit.
Explained here:-

I slapped my forehead at this statement! The clouds aren't moving!! The craft is orbiting at circa 17,000 mph on a 42 degree inclined orbit.