What Happened on the Moon Debunked - Part 3

Minutes 60-63 More assertions about how it was impossible to change lenses and magazines because of the bulky gloves, that Percy says don't look pressurised. That is because they weren't! The inner layer of the suit was the area pressurised. It is why Ralph Rene and his quite ludicrous swollen rubber glove experiment is such nonsense. The magazines were made to be easily handled with a simple push fit to change them. The only lens I am actually aware of as being changed outside, was the one on the Apollo 11 exterior TV camera(but I am not 100% sure on that), and conveniently the only one cited by Percy as though such things happened all the time. The lens on the TV camera was push-fit.

We are also treated to David Percy's opinion on how difficult it "must" have been to adjust the camera with pressurised gloves, then tells us they could do it with gardening gloves. Quite how anybody can make a film of this nature without researching this freely available information is amazing. I can't be sure whether Percy is lying here or just badly informed. The astronauts spent a considerable period of time practising shots and adjustments even in their spare time.

Ronnie Stronge continues, stating "even if they were able to do this" (which they indeed were!) as though it is in question from the strawman arguments, he then reiterates the point about so many professionally framed pictures. In actuality with a bit of practice it is quite easy to do. Here is a demonstration from an amateur photographer doing this:-

Minutes 63-64 Percy isolates one picture and tells us how wonderfully framed it is. He insists it has to be a mock up because it is perfect for a publicity picture. The fact that they always pitch the flag next to the LM, and park the Lunar rover close by is, I suppose, irrelevant! Besides, the picture is not perfect, the LM is not central and the rover is cut off at the edge. This is one of those cherry picked observations that ignores the numerous awful pictures.

Percy says it would have taken a photographer several hours to get it right in a studio. The fact that we have already established perfect exposure settings for the Moon in advance, and confirmed by the 3 previously successful missions,  is also supposedly not important! He treats us to a mockup to establish in the viewer a definitive of how it was done.

He ignores the sharp black single shadows, only possible in an atmosphereless environment, without extra lighting and a single bright light source. Most notable of all, he ignores the astronaut visor reflection showing his mockup is complete bull!


Minutes 65-66 More shadow nonsense. Percy compares different shadow lengths and concludes that it is impossible on a flat terrain like the Apollo 11 landing site. What rubbish! As can be seen from this picture from Google Moon, the terrain is certainly not flat at all:-

The whole premise is taken from the use of the term "relatively flat", when the relation is to massively uneven terrain. It doesn't mean it was like the Salt Plains of Utah!  Percy's conclusions are so painfully wrong, that as a cameraman, he has to be lying. Shadow lengths vary with terrain and perspective, and the demonstration they use has an actor approaching a wall, debunking their argument without even knowing it! 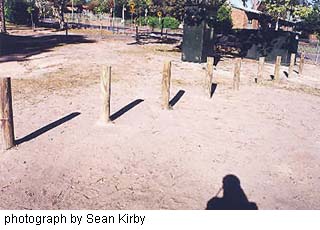 This one photograph debunks their claim completely:-


Minutes 67-68 This bit is actually a curious anomaly where the flag has changed direction after they have finished the EVA and entered the LM. Ronnie Stronge treats us to a laughable assessment about how it could be some kind of "whistleblowing semaphore signaller"!! He then gives the throwaway line, implanting a thought in the viewer, concerning astronauts dying or being "seriously irradiated on the Moon"! This is laying the groundwork for the follow up later about supposed lethal radiation.

The flag movement is easy to explain.


122:36:31 Aldrin: Roger. We have four out of eight (garbled) talkbacks indicating red. We still have the circuit breakers out as of right now. I believe this is normal. We have just entered Verb 77 on page Surface-52 and are ready to proceed with the hot fire. Is it normal to have these four red flags? Over. (Pause)
[Verb 77, Enter ("V77E") is at the middle of the page. They are about to test fire the RCS thrusters to make sure those are all working normally. During the 1991 mission review, I asked if the hot fire rocked and/or shook the LM. Did they check the thrusters individually or all together?]
[Aldrin - "We exercised the controller so that it would give a command for each of them to fire. I don't think that we were verifying that they fired. But the ground was getting something. I'm pretty vague on that. Maybe we got the noise but it sure didn't rock any, or physically jolt."]
[Armstrong - "I don't think it moved much."]
The flag was moved by the thrust from the test firing. The RCS thrusters were all fired pre-launch to ensure that they worked correctly. There was a big song and dance about a similar observation on the Apollo 14 flag here:-


Minutes 68-69  After telling us about the "continuity error" on Apollo 11, we are then shown "another one" with Apollo 16. An astronaut preparing the flag, and told that the camera immediately pans round to the right where "astonishingly" the flag has already been erected. This excerpt actually shows the two pieces of footages overlaid and speeded up giving the illusion it was done too quickly, although Percy admits it was 69 seconds later on. He over elaborates on the details and effort needed to plant the flag and makes the strawman argument that it could not have been done in such a short space of time. Percy deliberately leaves off the audio from this clip, as it shows what happened.

Here is the Real Player clip:-